The Socio-Economic Study on Direct Sellers in the European Union

Seldia, the umbrella organization of direct selling associations in Europe shared the findings of a large-scale survey, during the annual conference a few weeks ago.

The study which was actually the first of its kind, that was conducted in a long time. It was done by the international research firm Ipsos over a two-month period between February-April 2018. Participants were from the databases of direct sellers provided to Ipsos by direct selling companies. The survey covered over 30,000 direct sellers from 11 markets.

Some of the the key findings from this significant study are summarized below:

Entrepreneurship is so deeply rooted in the model that it has become synonymous with direct selling. Most direct sellers associate ‘independence’, ‘freedom’ and ‘flexibility’ with their work and the sector and cite this as part of the reason why they choose to be involved.

Women Are the Driving Force of Direct Selling 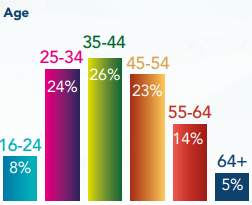 68% of the respondents say they use personal, social and professional networks. While they have adapted well to the online space, face-to-face meetings remain as a very popular channel. 1/3 of direct sellers mention meeting new people as a primary motivator for becoming involved in the direct sales sector.

Again, 1/3 of direct sellers cite flexibility and long term supplemental income as a very significant factor in choosing direct selling. 63% say they have part or full time jobs outside of direct selling, highlighting the flexible nature of the industry.

Direct selling’s offerings has helped 27% of the respondents go from unemployment to running their own micro-businesses.

About half of the respondents have been in the industry for more than three years, six years being the average. Those they have been direct-selling for over 10 years is 23%.

78% say they are satisfied with their activity. 8 out of 10 believe direct selling is a good way to earn additional income and 9 out of 10 are likely to continue with their current company.

Definitely, there is a lot of takeaways from such a large-scale, multi-market survey. Analyzing all of them is beyond the scope of this article.  It is now up to Seldia and the sponsoring direct sales companies to make good use of the findings and also to make them available to the public.