Following the third quarter, five of the largest public direct sellers’ sales so far in 2019 have been lower than last year. The sales declines range from -1% (Herbalife) to -15% (Avon).

During the earnings call with the investors, management said they were focusing on “digital”, saying they had been “kick-starting the development of Avon beauty entrepreneurs as Avon influencers and bloggers to accelerate social selling,” and added, they would “continue to expand new digital tools that enable consumers to shop anywhere, anytime, and improve representative’s experience with better digital tools and training to run her business.”

Avon is aiming to expand its digital reach by initiating a “School of Bloggers” to help Avon’s micro-influencers develop social networks that get them closer to the customers and attract a new generation of representatives.

Earlier this year, it was announced that Natura, the cosmetics giant from Brazil would acquire Avon. This transaction is expected to be finalized early in 2020.

Asia-Pacific region reported 18% growth in Q3, North America 7%, and EMEA 3%. Sales in China was drastically down by 22%. However, this is still an improvement as the previous quarter revenue growth in China was even worse (-35%). South & Central America and Mexico business units reported declining sales, too (-9% and -4%, respectively).

Commenting on the China market, CEO Michael Johnson said, “As we projected last quarter, the trends in our China business improved in the third quarter and our recovery in that market is on track. The strategies in China are progressing. And we continue to expect further improving trends in the fourth quarter.”

Herbalife management announced their full-year sales outlook as between -1.2% and 0.1% for 2019. For 2020, though, Herbalife aims at growing again (by between 1% and 7%). As you can see on the chart above, Herbalife has not been able to increase its sales in the last five-year period.

In a separate press release following the quarterly results, Herbalife announced its CEO transition plan that would go into effect in March 2020. According to this, Michael Johnson who has been serving as CEO on an interim basis, would remain as the Chairman of the Board, and Co-President and Chief Health and Nutrition Officer John Agwunobi would become the new CEO.

“Revenue came in slightly below expectation, primarily due to the challenging regulatory environment in Mainland China, where meeting restrictions continued throughout the quarter. Despite this, our sequential sales leader trends stabilized both in China and globally, and recent product introductions and business incentives drove year-over-year increases in customer acquisition,” commented Ritch Wood, CEO of Nu Skin.

Nu Skin reported $590 million revenue in the third quarter which was 13% less than last year same quarter’s figure ($675 million). The highest decrease came from China (-23%), company’s largest region that generates more than 1/3 of its global volume. In the third quarter, Nu Skin’s all regions but Japan (+2%) reported negative growths.

Apparently, Tupperware’s difficult times are not over. It reported declining sales for the third quarter in a row this year. The first quarter 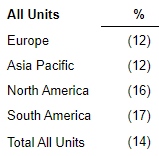 “Sales for the third quarter ended in line with our forecasted guidance as the challenging trends we’ve been experiencing in Brazil, China, and US and Canada persisted as we expected,” said Tricia Stitzel, company Chairman and CEO. “We understand that we need to live up to the challenges of being a competitive global business and we need to drive rapid improvement. We can and we will,” she added.

As far as the year-end forecast is concerned, the management expects a 12-14% sales decrease as compared to 2018. This will be Tupperware’s lowest yearly sales in more than a decade.

Tupperware shares tanked last Friday, after the company said it would suspend dividends. Tupperware share price is down 67% as compared to beginning of 2019.

Following the disappointments in the first and the second quarters (7% and 15% declines in sales, respectively), USANA reported a negative growth in the third quarter as well: -12%.  USANA’s total number of actives at the end of the third quarter was 558,000, compared to 615,000 in the prior-year period.

CEO Kevin Guest said, “Although we continue to face a challenging sales environment in China and other regions, we were pleased to see sales in several markets improve on a consecutive quarter basis… We also recognize, however, that we still have work to do in the Southeast Asia Pacific and Americas/Europe regions towards regaining sales momentum.”

All regions contributed to the declining sales in Q3: The largest region China was down 19%, North Asia was again, -17%, Americas & Europe -9%, and Southeast Asia Pacific -8%. China generates more than half of company’s global volume and sales in this region was down 23% in the second quarter, too.

Management announced USANA would be hosting its Annual China Sales Meeting in November. 10,000 people are expected to attend this event in Macau and at this event, the attendees will be offered “a preview USANA’s plans for China in 2020”.

Click this link for our previous Quarterly Reviews of major direct selling companies.