It has always been interesting to see how direct selling companies compare on various grounds. Where they spend their money and at the end of the day, how much money they generate for their investors absolutely rank among the most interesting ones.

In this article, we will be briefly reviewing 11 direct sellers with varying sizes of business and with different product portfolios. These are Avon, Herbalife, Mannatech, Natura, Nature’s Sunshine Products, NHT Global, Nu Skin, Oriflame, Tupperware, USANA and Youngevity. This review will be based on their 2016 first quarter figures. 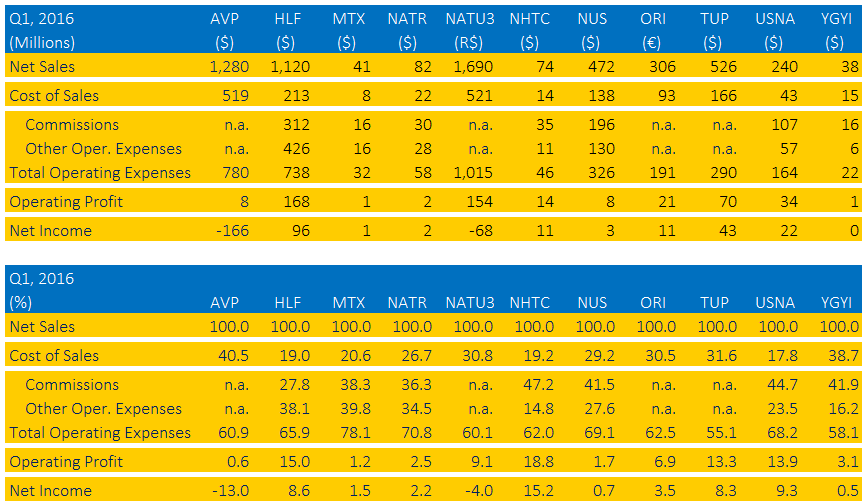 This cost item is basically the total of the direct costs attributable to production of the goods at a company. It includes all costs of materials bought and used in the production process and also the direct labor costs. This is sometimes referred to as “cost of goods sold”, too.

Among the 11 companies analyzed, Avon (41%) and Youngevity (39%) are the two that spend the highest portion of their revenue on products. Herbalife, NHT Global and USANA on the other hand are on the other extreme, with costs of sales of 18-19%. Quite a difference between the two ends, isn’t it?

An interesting observation here is that both Avon and Herbalife made roughly the same operational expenses in absolute terms and generated revenues not too far from each other. However, Avon’s cost of sales ($519m) was more than twice as much of Herbalife’s ($213m). All other things being equal, it seems Avon can gain a lot by doing some savings in its production costs.

From the industry perspective, it would be great to see companies’ commissions payouts to sales force but not all disclose this information. Those figures are shown as “n.a.” on the chart.

Among those we have data for, NHT Global stands out with the highest bonus payments as a percentage of its sales: 47.2%. Close to it is USANA with its 44.7% commissions expense. Herbalife has the lowest figure here with 28%.

When we look at the total operating expenses combined, we see Mannatech with the most costly operation. In the first quarter, Mannatech spent more than 78% of its revenue to run its operations. Mannatech was followed by Nature’s Sunshine with 71%.

Tupperware (55%) and Youngevity (58%) had the lowest operational expenses.

It is interesting to note here that while NHT Global (15%) and Youngevity (16%) had very low “other” operational expenses, this figure was comparingly rather high in the case of Mannatech (40%).

When we include the non-operational items such as financial gains and expenses and taxes to the picture and come to the bottom line, we start seeing companies making losses. In the first quarter of this year, Avon and Natura posted net losses of -13% and -4%, respectively.

NHT Global reported 15% net income as the highest of the 11 direct sellers here. USANA’s (9%), Tupperware’s (8%) and Herbalife’s (9%) net income ratios were quite healthy as well.