Few weeks ago the WFDSA (World Federation of Direct Selling Associations) announced 2015 figures it had gathered from local organizations. Before that, we had Direct Selling News magazine’s company-specific sales volumes.

Both reports contain interesting statistics, especially from a comparative point of view. Let’s take a look at these numbers.

As the chart to the right shows, Asia-Pacific remains to be the world’s largest direct selling 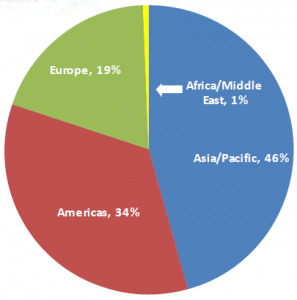 When we turn to countries, the US still keeps its #1 position with an annual sales volume of $36.1 billion. China is a close second with $35.5 billion. The US market’s growth rate in 2015 was 4.8% and China’s was 19%. So, it is very likely that China will be announced as the world’s largest direct selling market by this time next year.

In 2015, wellness category was the largest one globally with 34% share. Cosmetics category produced 32% of the volume. Household goods and durables accounted for 11%, and clothing and accessories for 7%.

Amway kept its leadership position among direct selling companies in 2015. Amway’s 2015 global sales was $9.5 billion, representing a 12% decline as compared to the previous year.

Regions’ top 5 companies in sales volume in 2015 were as below:

Note: Public companies report their financials quarterly so their numbers can be accessed to easily. Direct Selling News magazine that compiles the “Global 100 List” every year relies on private companies’ self-reported figures. And these make up nearly four-fifths of the top 100. To ensure reliability, Direct Selling News says it requires the net revenue number to be validated by the CEO and certified by a qualified agent. Consequently, those private companies that chose not to disclose their revenue figures did not appear on this list. And Direct Selling News believes there are a number of companies like doTERRA, Nikken, Shaklee and Stella & Dot  that could have been on the list.

This site uses Akismet to reduce spam. Learn how your comment data is processed.