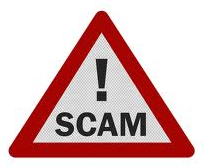 A Ponzi scheme is an investment fraud that involves the payment of purported returns to existing investors from funds contributed by new investors, as explained by the SEC. In other words,  it is a scheme where the investors who join earlier are paid off with funds raised from new ones.

In the legitimate world, individuals invest in a variety of instruments and expect returns from their invested funds. If this is a stock for instance, they expect to gain as its value increases and to collect dividends as the company makes profits. If the instrument is a bond or a term deposit, then the expectation is the interest income. We can go on with these examples where the returns are dependent on that individual’s own investment.

In the case of a Ponzi scheme on the other hand, the source of “Person A”s return is the investment made by “Person B”.

Usually these schemes promise very high returns to be able to attract more and more investors. And the scheme survives as long as there is an increasing inflow of new investments. Even a small slowdown or a hiccup in this flow results in the collapse of the whole structure.

Throughout history, there have been countless Ponzi schemes. Despite they are much more visible today with the help of media, especially the digital media in the recent years, they are still nowhere near to have disappeared.

While the history has witnessed numerous examples to these, three of them deserve closer attention due to their very distinct stories.

Ponzi. He was not the first such “schemer” in history but his organization grew much bigger than its predecessors and his “business model” was much more sophisticated, at least on paper.

He was born in Italy as Carlo Ponzi and immigrated to the United States in 1903. He later told reporters, “I landed in this country with $2.50 in cash and $1 million in hopes.”

From Boston as his first stop, he moved to Montreal where he was sentenced to three years for forging checks. Following another two-year jail time in Atlanta for smuggling Italian immigrants across the border into the United States, he ends up in Boston.

One day in 1919, he receives a letter from a company in Spain with an “international reply coupon” inside. This is a coupon that can be exchanged for postage stamps in another country allowing the recipient to mail for free. What Ponzi noticed was that an international reply coupon could have different values in different countries. In financial terms, there was a “spread” to benefit from.

So, the business model he “sold” to investors was as follows: His company would buy reply coupons in various countries at lower prices, send them to the United States where these coupons would be sold at higher prices. While this sounds like a good idea to start with, it was logistically impossible those days to make such international transactions.

However, neither Charles Ponzi was serious about this model, nor his investors cared much about it. He was promising 50% returns in 45 days, 100% in 90 days, and was keeping these promises! Thousands of investors gave him about a total of $20 million. The model in fact, was simple: Funds received from new investors was sent to those who joined previously as their return.

This went on until August 1920 when Boston Post started running articles questioning the model’s legitimacy which led to a panic among Ponzi’s investors. Charles Ponzi was then, prosecuted.

Facing a lifetime in jail, he pleaded guilty and was sentenced to five years.

After he was released, he was sent to jail a few more times and finally, he died in Brazil at a charity hospital in 1949.

What happened in 1996-1997 in Albania, a small Balkan country in Europe, is definitely an important case to

look into. This is because its scale relative to the size of the economy and its socio-political consequences were unprecedented.

Albania is a country in Southeastern Europe with a coast to the Mediterranean. After its liberation from the Nazi occupation, the country became a communist state. The communist regime was dissolved in 1991-92 and a democratic state was founded.

During the communist era, all forms of private property were banned. Having lived under this regime for decades, the majority of the Albanians were completely unfamiliar with free market institutions and practices when the transition began in 1991.

During this transition, Central Bank put restrictions to limit banks’ credits because of increasing bad loans. This led to the emergence of various lending institutions. And besides these, grew companies that collected deposits not to lend them to others! These became Albania’s infamous Ponzi schemes.

In the beginning, there were no regulations. Even when the banking legislation was put into effect, it became apparent that the government was not in favor of taking any actions against these schemes. On the contrary, the government and the officials were supportive of them, appearing in these companies’ social events.

Some of these companies were exact Ponzi schemes with no real investments involved, some were in the “grey zone” and some were said to have been in various criminal activities.

In the early days of 1996, the leading Ponzi schemes in Albania were offering 4-6% monthly interest rates. In the following months, this increased to 8% a month. One of these companies started offering a monthly interest of up to 19%! Country’s yearly inflation rate though, was about 17%. Albanians were selling whatever they had, including their houses, cars, and animals on the farms to invest in these schemes.

Then, even more aggressive offerings started pouring in. One of these businesses announced it started offering 30% monthly interest, then another promised to increase people’s deposits by “three times in three months”.

While all these were happening, Albanian government was only passively watching. And this was despite all warnings coming from the national Central Bank, and the international bodies like the IMF and the World Bank.

Then, the inevitable happened and one the largest schemes started having difficulties in making its payments and that was the first signal of the collapse. Investors started questioning all schemes. In January 1997, two companies declared they were bankrupt. They were followed by others.

In March 1997, Albania was in a complete chaos. The government lost control. Many officers in the army and members of the police force deserted, firearms were looted from army bases. Foreign countries started evacuating their citizens living in Albania and the Albanians themselves started emigrating to other countries. The government resigned and an interim government was appointed to take the country to a new election.

People’s losses in these schemes reached $1.2 billion and more than 2,000 people were believed to have been killed in this country-wide chaos.

Bernie Madoff is the last and the most recent case we will look into. His company is 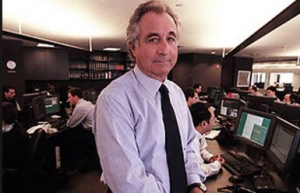 also known as the biggest fraudulent scheme in history.

Madoff had a prestigious career before being famous for his Ponzi organization. Shortly after graduating from the university, he started his investment firm, Madoff Investment Securities. His company became quite successful and by the end of 1980s, it was estimated to be handling more than 5% of the trading volume on the New York Stock Exchange. Madoff’s company was among the earliest ones to use the computer technology for stock trading. This wave helped to give rise to the NASDAQ where Madoff later served as its Chairman for three years.

In late 2008, Madoff admitted his sons, who also were working at the asset management branch of his firm, that he was actually running a large Ponzi scheme. In the HBO  movie “The Wizard of Lies,” where Robert De Niro plays Madoff, he says, “There are no investments. I made them up. I took some money from some people and gave it other people. There’s nothing left.” Madoff’s sons reported their father to authorities and Madoff was arrested to be charged with securities fraud.

Bernie Madoff was said to have admitted to investigators that he had lost $50 billion of his investors’ funds. Others say this was in fact, $65 billion. In 2009, he pleaded guilty to 11 felony counts including investment adviser fraud, money laundering, false statements, and theft from employee benefit plan. Later, the court sentenced Madoff to 150 years in prison, the maximum possible.

No one exactly knows when Madoff began stealing from his investors. Madoff told in an interview that it all started in 1987, but later he said it began in 1992. Madoff’s former account manager, Frank DiPascali, Jr., said in a court testimony that this had been going on “for as long as he remembered.” He had started working at the firm in 1975!

In February 2016, court-appointed trustees announced that more than $11 billion of  victims’ total principal investment of $17.5 billion had been recovered. However, Madoff’s scheme was often referred to as a “$65 billion scheme”. In fact, he actually stole less in principal funds. But his firm produced account statements telling the investors that they earned returns making them worth a total of $65 billion. So, from the investors’ point of view, what they really did lose was $65 billion.

A group of researchers at Cornell University quantified how much of an impact Madoff’s scheme in history had on the financial industry. They found that it was $363 billion!

For more on Ponzi schemes, you might also want to read:

On July 10,1990, Oriflame Co-Founder Jonas af Jochnick was appointed as the Chairman of ORESA, a newly founded subsidiary of Oriflame.

This company was founded for the sole purpose of exploiting the opportunities in Eastern Europe following the collapse of the communist regimes. This was a quite risky decision at the time but proved itself to be the perfect one. It changed the fate of this small-scale European direct selling company and turned Oriflame into a global power.